There’s been a concerted move toward digital distribution of games for the last few years, and now – with the introduction of Stadia – Google are pushing streaming only (not withstanding the technical hurdles of ‘the last mile’). It means having physical versions of games, or even long-term playing ability, is becoming a thing of the past. There are similar issues facing the games we bought as kids, though. If you’re my age (40-something in 2019), and lived in the UK, you grew up buying games mostly on cassette. Sometimes floppy discs, too, but perhaps only a couple per year on birthdays and Christmas. Tapes, though, particularly once budget label Mastertronic were born, were easy to come by, and great value for money. As a pre-teen, you could walk to your local newsagent, and for £1.99 buy a brand new tape game. Those really were the days.

Forward-wind (pun intended) to 2019 and you may still have some of those tapes and discs, or have re-bought them for nostalgic reasons. If you’re reading this you’re probably like me and have original hardware to play them on. And if you’re lucky, some of those tapes and discs have survived the intervening years and still work. You still have the physical copy of that game, and you’ve got one-up on current-gen gamers with their 50GB download that may or may not be pulled at any moment by Sony, Microsoft et al.

However, much of the media these games are stored on is deteriorating, or has already reached the point where it no longer works. The magnetic media is perishing, along with the data on it.

There are bands of people across all formats working hard to preserve these games and applications for the future, making dumps, converting them to formats that emulators can read, and that you can even record back to tapes and discs to make new copies. A system that is dear to my heart because it was the first I owned that was all mine (as opposed to belonging to my eldest brother) was the Atari 8-bit line, specifically the Atari 800XL. I was fortunate that I bought it from one of his friends so it came with a lot of games, variously on tape and disc. For this reason, it’s the system I chose to actively take part in preservation.

Dumping discs entails a little more witchcraft than I have the equipment or inclination for, and as most of my experience was with tapes, and I have a few(!), I chose to dump these, as it’s an easier process.

My journey began with conversations with my good friend Fred, owner of atarimuseum.nl. He has been actively helping the community with sourcing and archiving for a while as part of the a8preservation team. He gave me the basics of dumping, and pointed me to the excellent page that Marceau created. Have a look here to get the basics (rather than me repeating them).

In a nutshell, though, connect your tape deck to your computer (either from a single 3.5mm jack cable via the headphones socket, or twin phono RCA), and using an application like Audacity (free), record the output in real-time. You want to make sure the recording is as loud as it can be without clipping – that is, when the waveforms get ‘clipped’ at the top or bottom. Cut off any dead space at the beginning and end of the recording. One thing to note if using a single cable is that your recording will often have left and right stereo channels transposed. Atari data tracks are on the right channel, normally, and audio can be on the left. You will need to transpose those in Audacity (two clicks!). Export as a WAV file (default settings are fine).

Then you need to run the WAV through the brilliant A8CAS. This will convert your WAV to a CAS file. Assuming there were no problems with the WAV, the resulting CAS should load in the Altirra emulator, at least. Possibly others, maybe even real hardware. You might find that you need the ‘C: patch’ turned on which speeds loading up and is more forgiving of any discrepancies in the data stream.

There are various tricks you can use (like boosting gain on quiet parts) to get a good WAV, but these only need to be investigated if you’re serious about getting into archival in a big way! And to that end, I’m proud to say I’m now part of the a8preservation team, too, and am helping to create digital archives of games before they get lost.

And what was the first game I archived? Colourspace by the legendary Jeff Minter (Llamasoft). I chose it because it didn’t exist (as a cassette release – the disc copy had been dumped and distributed) and was a favourite of mine as a kid. It was difficult to dump and needed a few recordings using different tape decks until I got one that could be converted to CAS.

Once I’d got it working, I tweeted Jeff Minter, and to my nerdy delight he replied that he was happy for it to be distributed. I had created the world’s first cassette dump of Colourspace for the Atari 8-bits (as far as we could tell)! 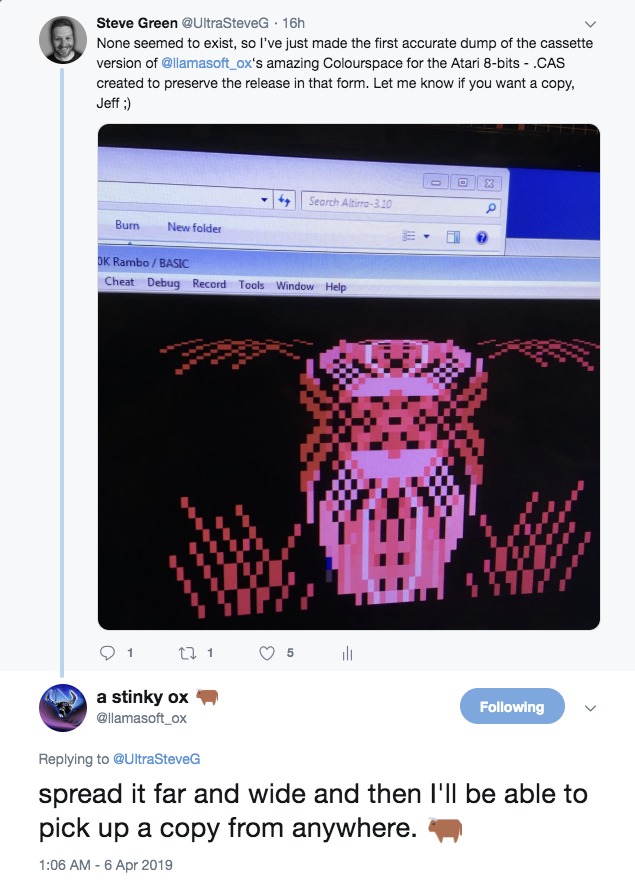 So, as well as being part of the main a8preservation cause, you can download the CAS file from this link.